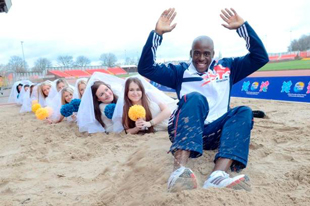 Blushing brides brandishing bouquets have proven to be no Olympic hurdle for Team GB long jump hopeful, JJ Jegede, as he "leap"-froged over them on February 29- the only day women can propose.

Like Olympic athletes, for the country's women, some chances only come round every four years.

As thousands of our athletes are putting forward their proposals for inclusion in the London games, many women across Britain were doing the same - with a summer wedding rather than a gold medal their ultimate goal.

Tradition dictates that, according to old folk laws, 29 February is the only day women are able to pop the question to potential grooms. The quirky tradition, which dates back to the twelfth Century, also allows besotted ladies to ask for their man's hand in marriage once every Leap, or indeed Olympic, Year.

JJ Jegede, Team GB Long Jumper, said: "Jumping at a competitive level is intense, but leaping over 12 brides is certainly quite a challenge! With this sort of training, I'm certain I'll be ready for anything at London 2012."

Stephen Vaughan, Managing Director of Thomas Cook London 2012 Partnership, commented: "As a company built on traditions, having taken customers to the first modern Olympic Games in 1908, we hope to see lots of wedding rings alongside the famous five rings this year.

"Although Leap day is for our ladies, we are also hoping to inspire our gents to go for gold at the Games. With our Short Breaks, you could treat the lady in your life to a night in a top London hotel and even pop the question at the equestrian. London 2012 is the event of a lifetime and our best destination for a proposal yet."

But be warned, for those men who turned down the plucky woman, tradition also states that they must compensate their proposer with a new dress, silk gloves or even just a kiss.

Unveil A Better You At The Altar

Advice For Mother Of Bride/Groom

Gorgeous Goodies For Your Big Day